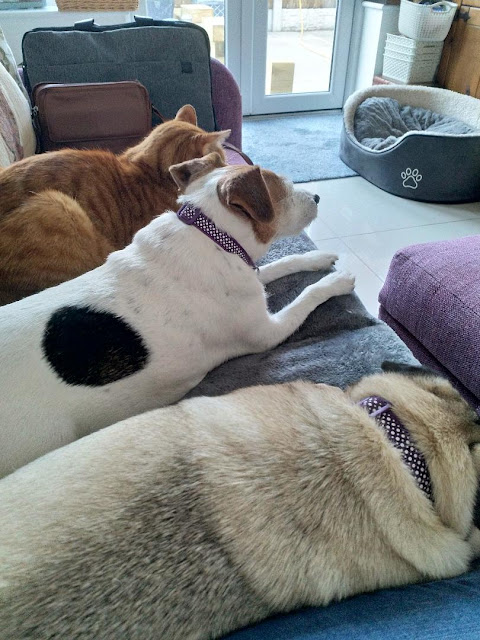 Hello ... remember me 😃
Sorry I've been away sooooo long, it's been a tough couple of weeks.   We officially moved into our new homes on the 3rd July, which seems like a lifetime ago.  With my ongoing back pain and now blood pressure problems I have been doing everything   s o   s l o w l y   it's been unbearably hard for someone that is used to cracking on and just getting things done.
Hopefully I will be able to get back to regular blogging once we have gotten this weekend out of the way.  We are completely emptying the flat over the next few days, I say we but it's mostly Alan doing the lifting and shifting with me sat like pained-face royalty issuing instructions.
There's only bits left but bits nevertheless and they do need bringing here ... especially my boxes of tinned and packeted foods.  All but the large bookshelves we have now sold on Facebook Marketplace, with the little sofa being picked up just last night.  We have a cleaning company coming in next week for an end-of-tenancy clean and then I will hand the keys over early and hopefully get my deposit back.  I have plans for the money 😉 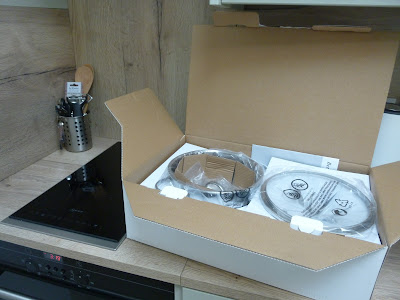 My kitchen is almost complete, I am just awaiting delivery of an upright piece, a small section of worktop and my oven ... but excitingly with my new hob came a free gift, I say free in the loosest sense of the word as the little multi-functional hob cost an arm and a leg as far as I'm concerned.  But I'm getting used to it and it cooks food as it should, if I press all the right buttons in all the right order!! 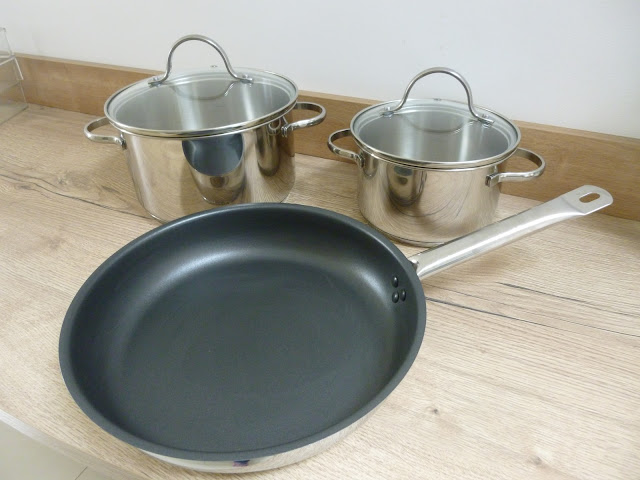 And with it being an induction hob only certain pans will actually work on it.  I was thinking about streamlining my pan collection anyway ... now I have no choice  😄 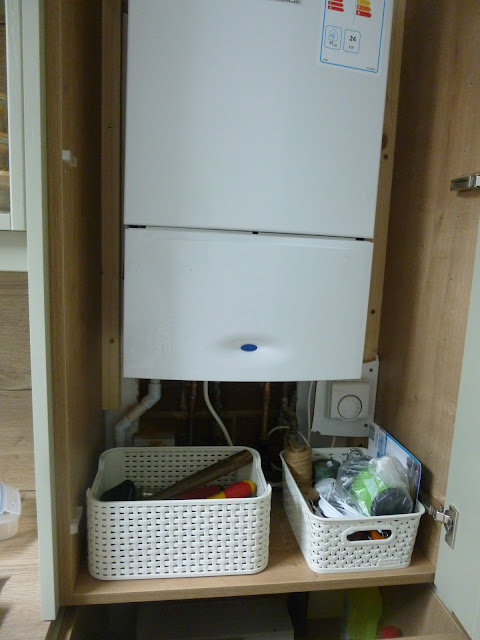 I'm taking full advantage of any useful spaces that I have in this tiny annexe that I now call home, so the shelf under the combi-boiler has been requisitioned as my tool and bits and pieces cabinet. 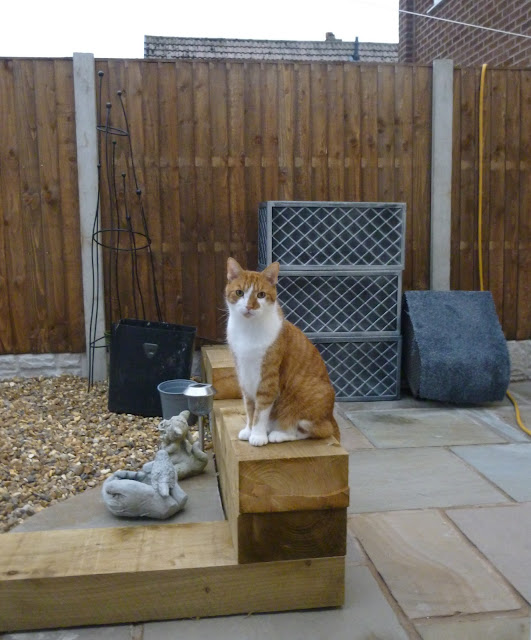 And Ginger has claimed the off-cut of sleeper to have as his evening vantage point.  As you can see in the top photo all the animals have settled in extremely well, having their own outdoor space once again and the day-long access to both Mum and Dad's homes has made them very happy and relaxed indeed.
Happy animals = happy us.
Oh, and as you will have noticed from the new header the name of my new abode is - Lavender Lodge.  Which ties me neatly back to my roots and my beloved little shop in Ulverston where I sold lavender plants and goodies of all descriptions.
Back soon.
Sue xx 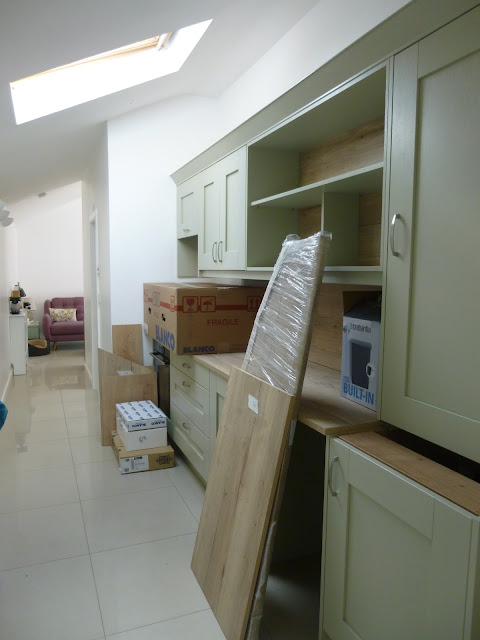 This was my kitchen on Saturday morning, moving in day ... not finished and with the wrong sized worktop having been ordered it won't be completely finished until the next order turns up.  I have a temporary oven ... which I won't be using but it does mean that all the electrical parts have been tested etc so at least we know my oven should work when it arrives.  By tonight I will at least have a usable sink and my washing machine can be used, taking the pressure off Alan's.  I'm not happy, but I do know it will be worth it in the end I just have to grit my teeth and actually get to the end.
Just out of interest would you use an oven that has been used by lots of other people, especially when you don't eat meat and have no idea of what might have been cooked in there in the past?
Luckily I have my nice new Remoska to tide me over and my microwave once I fetch it from the flat. 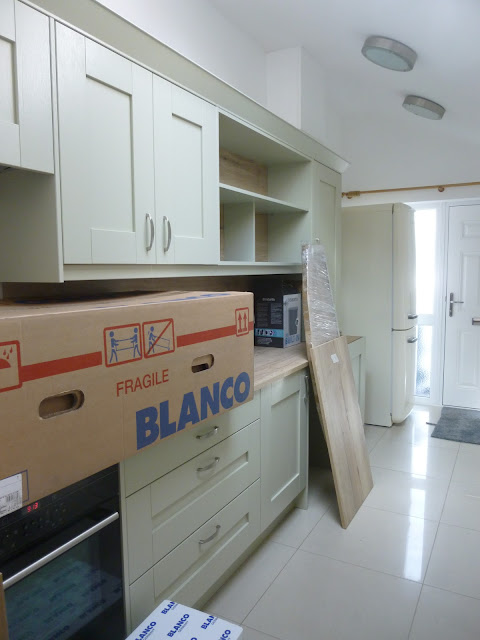 I love the colour scheme of the kitchen, and seeing the Smeg alongside the units it no longer looks humungous and out of place in it's setting.  So all is not lost 😀
The whittling down of the kitchen appliances and accessories will be ongoing as I place things into their final resting places,  I really do not want the few cupboards that I have to be crammed with stuff that I could actually live without quite happily. 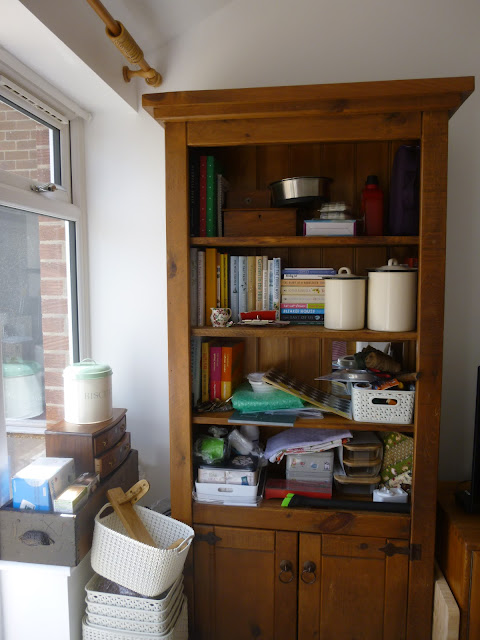 So we are currently in that chaos that is moving into a new place, you know the one, where everything we need is somewhere else and usually inaccessible.  but you know eventually you will get there, it's just that something in your brain says it should be happening NOW, RIGHT AWAY ... and I'm getting remarkably good at ignoring that.  😄
But bit by bit we are getting things straightened out and today while Alan worked up in his office struggling with the hit and miss Wi-Fi ... which it turned out was due to EE having us on a phone tariff instead of a dongle tariff, for the last year ... I managed to get both our televisions tuned in and connected to the Freeview boxes, changed some addresses and generally emptied boxes and found things that we really needed, simple things like soap dishes, dish cloths, phone chargers, the dogs new ID discs.
Now I need to sit back and reax for a while, waking up at 5am each morning due to my aching back means I am missing out on my usual 8 hours of sleep a night ... and boy do you want to keep away from me when I get this tired, even I get scared of my own company!!
Sue xx
at 4:47 pm 31 comments:

The One Where It Gets Worse Before It Gets Better 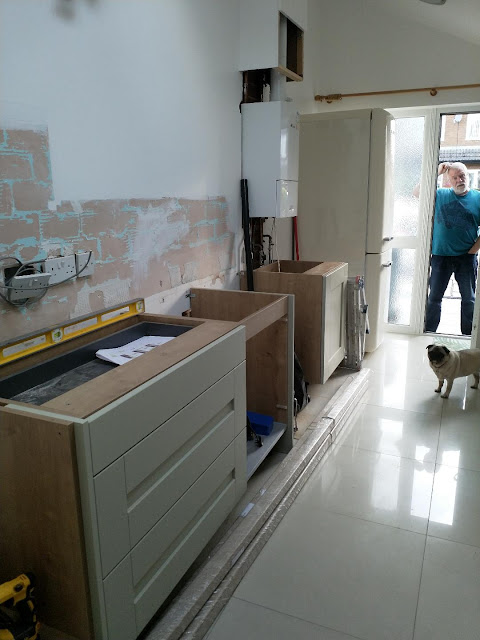 My back was pretty bad yesterday so Alan went round to oversee the kitchen fitters, wait in for our sofas to be delivered and work from the comfort of his new kitchen, with the table and bench now in place he had as much comfort there as he has here at the flat.  He stole the dongle so he had internet connection and it worked out pretty well.
My kitchen doesn't look that much different from the last photo I showed you, but now all the electrics and the plumbing have been sorted out and the units are properly fixed.  They will be back to finish off today ... and tomorrow if needs be.
After tea we took the dogs round to the annexe so I could have a peek at the kitchen progress and check on my new sofa, which had also been delivered in the afternoon.  Gosh it really feels like it's all go at the moment!! 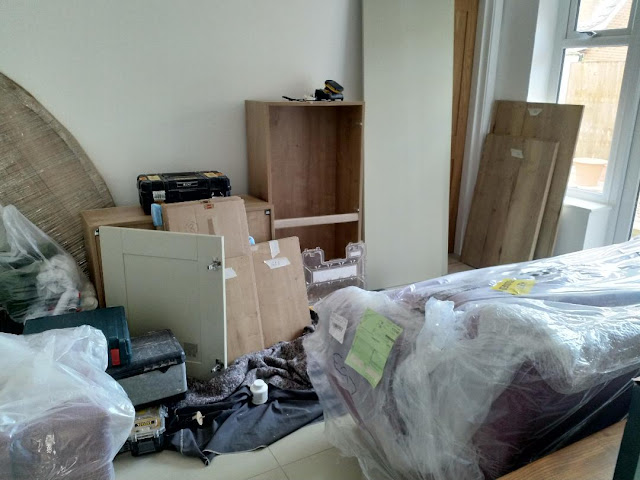 The living room ... wow what a mess, and I couldn't really see the sofa properly as after checking it over and the legs being attached by the delivery guys, it was left in it's plastic covering to protect it from any dust.  But the colour is glorious and it will really be a feature that fits in well with the name of my new home. 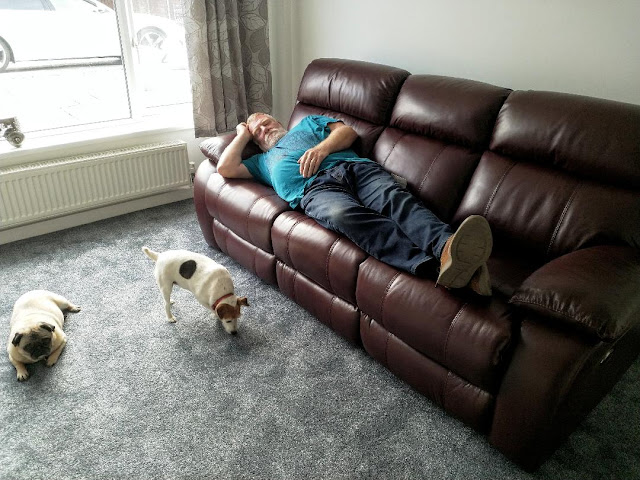 Then we went into Alan's house so I could see his new sofa which had also been delivered yesterday, although it was bought from a different company to mine. His has an electric recliner at each end and a fixed centre seat, it's really comfortable and Alan admitted to perhaps falling asleep on it for ten minutes at lunch time ... so it's been well and truly christened 😄
As Alan's place is now fully decorated, carpeted, curtained and cleaned we will be moving into our new places this weekend  ... at last!!  But there is no rush to do everything all at once as I have my rented flat until mid-August and have booked for an end of tenancy clean for late July. 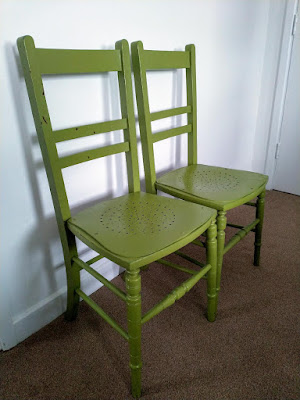 The decluttering continues and these chairs were put up on Facebook Marketplace yesterday.  Sadly I will have no room for them now.  It's time to be brutal as I would like for this to be the last time I have to declutter.  To move into my new space with just the things I need and love would be brilliant.
Less than 350sq ft of living space doesn't give you much space for clutter if you want to live a good and simple life.
Sue xx
at 3:00 pm 28 comments: