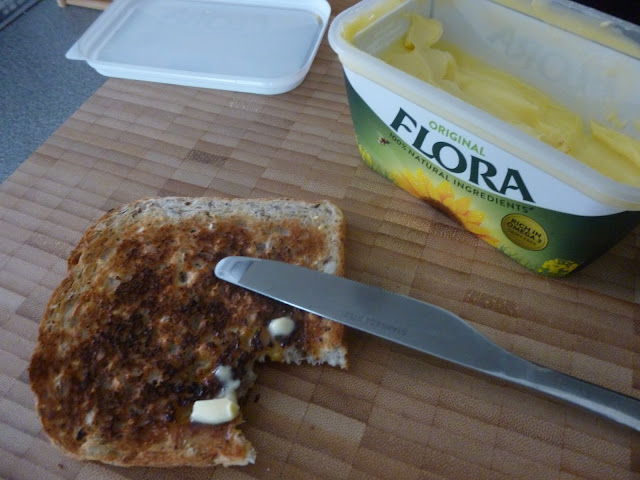 Is there anyone else out there who has to have that perfect toast moment you know the one I mean, the one when you get to the toast the second it's popped out of the toaster and butter a corner and bite into it before the butter has time to melt.
I do it every time ... it was even tasty this morning when my toast was slightly overdone.  I like my toast pale, or 'hot bread' as my son used to call it.  Hot and just crispy enough on the outside to qualify as toast but not too coloured.  Anymore of the dreaded black on this piece of bread and it would have been broken up as bird food ... or offered to Alan who relishes a slice of charcoal tasting toast 😄
I remember Delia Smith's Cookery Course on the television, it must have been back in the 80s or 90s, and one of the first programmes was about 'how to boil an egg' and 'how to make the perfect toast'.  I tried the toast method her way straight after the programme, which is basically getting it to the colour you like and then letting the toast stand in a toast rack or leaning against the marmalade jar for 60 seconds before buttering it to let all the steam escape.  It worked a treat so it's something I try to do every time now.
I've just actually found the instructions HERE. 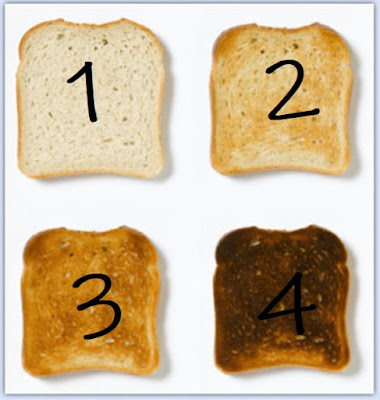 Anyway back to the colour, which of these would be your preference?
I'm definintely a number two girl ... with the first corner eaten immediately and the rest buttered a few seconds later and enjoyed with black coffee.  Now I have to go all this talk of toast has made me want another slice and as it's a Bank Holiday weekend here in the UK I don't see why I can't have a second breakfast  😋
Sue xx
at 11:51 am

Email ThisBlogThis!Share to TwitterShare to FacebookShare to Pinterest
Labels: Musings