AWOL and then AWOL all over again. 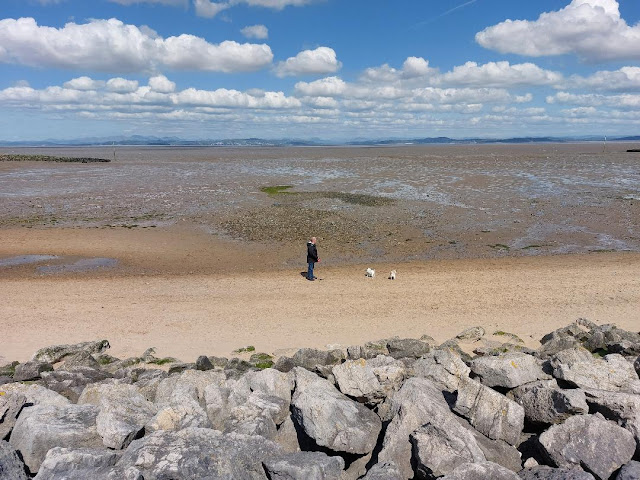 Sorry I've been AWOL for far too long 😦

There were lots of reasons but nothing for you to worry about.  The thing is I'm about to go missing again for 10 days, jetting off to warmer climes and leaving our homes and the furries in the capable hands of some very good house-sitters.  They come with their own little furry friend called Oscar so Suky and Mavis will have a little boy Lhasa Apso to fall in love with.  Although Ginger was not so enamoured on his first meeting with a dog that is not used to cats, and one that thinks that the way to get a cat to play with you is to wag your tail like crazy and bark at them.  No doubt and hopefully,  a compromise or truce will be called at the next meeting later on today.

The photo above was taken on an afternoon out to Morecambe last week, just look at that perfect sky!  I used no filters, that's just as it was and snapped quickly with my phone while Alan and the dogs walked along the beach and I followed along higher up on the prom.

Morecambe is just a thirty minute drive from us and it is always much quieter and nicer than Blackpool.  It used to look so rundown but slowly and surely it is turning itself around and people are starting to really enjoy it again.  I think this is partly due to the fact that the Eden Project North has now been given the go-ahead and savvy businesses are getting in on the act before rents for shop and business premises go through the roof after it's arrival.  It should be brilliant for tourism and the people of Morecambe ... and of course us.  😀

We enjoyed the walk, the fresh air and then a coffee and flapjack in a bustling little café before heading for home and a snooze over snooker for Alan and some reading for me.

I will be back soon I promise, just as soon as I get my shit head together and hopefully have enjoyed my break.  I'll leave you with some memes while I'm away just to entertain ... or annoy ... you.

Email ThisBlogThis!Share to TwitterShare to FacebookShare to Pinterest
Labels: Animals, Me, Musings