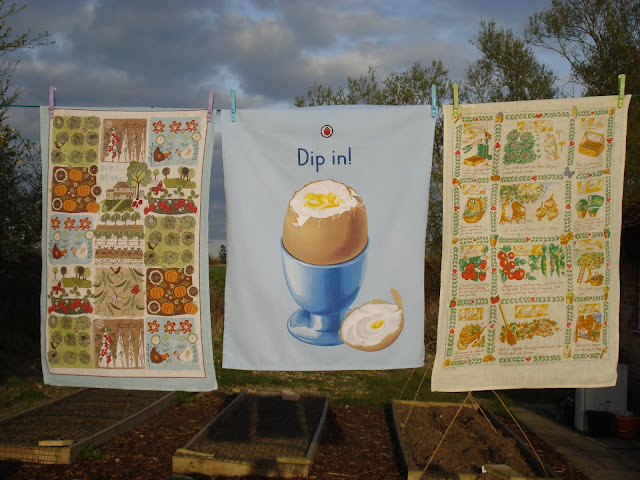 I was using one of my tea towels yesterday ... although Alan does I rarely dry pots with them ... so in this instance it was my blue 'Egg towel' that was in use for catching spills of marmalade as I decanted from jam pan to jars on the worktop.  I'd rather sling a tea towel in the washer than spend ages getting the worktop unsticky-ed.

I do dry up occasionally but they are mostly in daily use for a myriad of different things, including hand drying, lifting things out of the Aga and when they are not to be found hanging on the Aga they can turn up anywhere in the kitchen.

It suddenly hit me that I have been using these same three tea towels for a long time and I decided to look on my old blog for when they were gifted to me in return for a review.  It turns out it was way back in April 2011 - 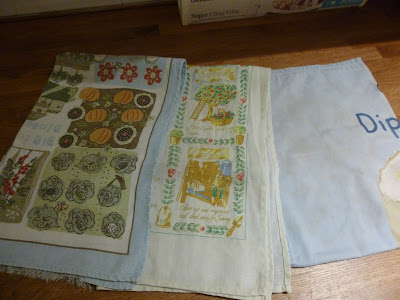 No wonder they are looking a little tired.  The blue 'egg' one is stained after a few too many spills of damson and blackberry jam making and so is now kept purely for this purpose.  The blue 'veggie' one is frayed at one edge where the seam eventually came undone, which is only to be expected ... imagine how many times these have been through the washing machine, it really can't be counted.  The cream coloured 'gardeners calender' one is just faded.

But they are all still in regular use and will continue to be for some time yet.  I love them to bits, once they have reached the end of their lives I guess they will briefly be floor cloths or tractor wiping cloths, but not yet.

Living simply means using what you have for as long as you can and only changing it when there really is no other option, and that's exactly what I intend to do with these old timers.