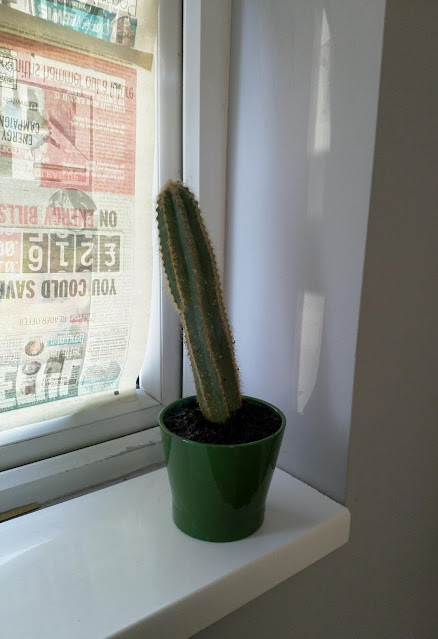 Meet Colin ... Colin the Cactus.
He was in the annexe when we first went to view it, he was in exactly the same place almost three months later when I had the keys and the place was mine.  He was moved off the kitchen worktop when they guys came to take out the old kitchen last Saturday, and that's when I realised he wasn't a fake cactus he was real!!
Poor Colin, he can't have had any water for months, no wonder he looked like the sort of cheap plastic fake cactus that you can buy from the pound shop.
He had simply given up the will to live 😭
I gave him a little drink when the guys emptied the U-bend and we found some water in it ... the water for the property was switched off while they took out the washing machine and sink and we couldn't turn it back on as we had nothing to cap off the pipes. Then I gave him a little of my bottle of sparkling water.
The drink obviously went straight to his head because this morning when we went to the new house to check on progress he had toppled out of his plant pot and was lying on the windowsill.  A drunken stupor or death ... I couldn't tell.
So we tipped all the compost out of his pot put a little back in the bottom and wet it well to weigh it down, and then I re-potted him and gave him a drink of nice fresh water.
Now I just have to wait and see if he survives ... or if it's curtains for Colin  🌵
Sue xx