A Weekend in Pictures and Words

This Bank Holiday weekend Scorton Village was holding its annual Bikes and Barrows Festival,  so after missing it last year we were determined to see as much as we possibly could this year. 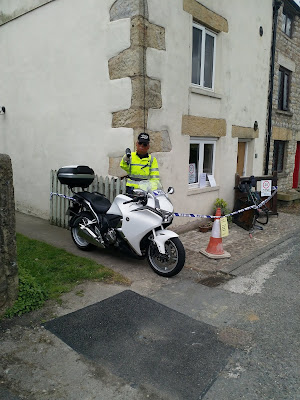 Houses and businesses all around the village took part displaying bikes or barrows and in most cases both, in their front gardens and along the street.

In this photo you can see a speeding bicycle has crashed into a wheelbarrow and the rider has been flung over the gate, totally ignoring the policeman with the speed gun (hairdryer). 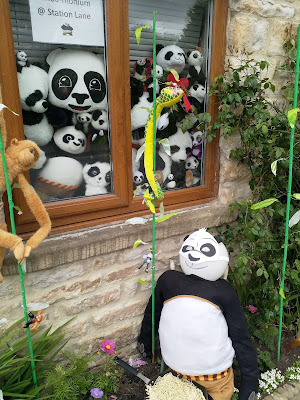 This one was called 'Pandemonium', the panda outside had a barrowful of food for his little companions that were clamouring at the window. 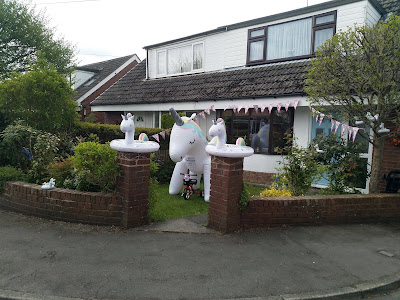 A garden full of inflatable unicorns,  the biggest one being on a tiny little tricycle. 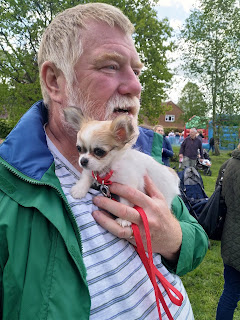 After visiting the Spring Fair in the village hall, where I won a £10 voucher on the Tombola to use in a local pub, we headed for home with tired legs and exhausted doggies.  Bella is learning to handle all the attention that a beautiful, tiny eleven week old Chihuahua pup gets, although by the end of the day she was starting to look a little bewildered. 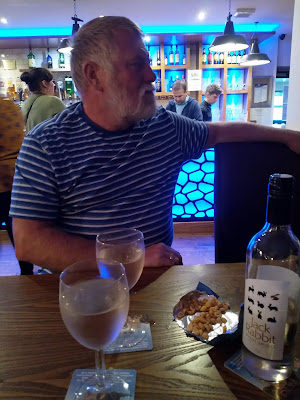 After a good day it was only right that we retired to the caravan parks clubhouse for some wine and bingo ... no wins for us this week but a good time was had by all  😃

We took a doggy walk in the direction of the village again on Sunday to wander down a few roads and cul de sacs that we had missed the day before.  The people in this house must have really loved Queen ... they had Queen's greatest hits playing on a loop for all of the three days!!

This knitted bike was lovely,  an enormous amount of effort had gone into making this completely covered and wonderfully colourful.

And this Barrow planted with vegetables was a work of art. 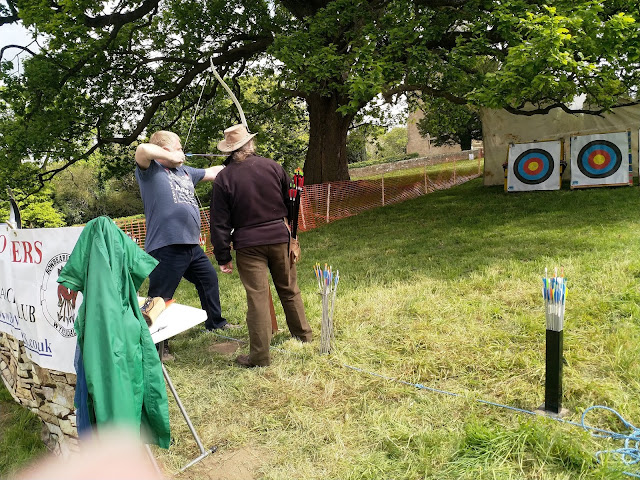 After a wander through the streets playing spot the bike, spot the barrow, we went onto one of the fields where archery instruction was to be had for a £2 donation to charity.   Alan has always wanted to have a go at this so he paid his money, took all the advice and by his fifth arrow was hitting the bullseye. 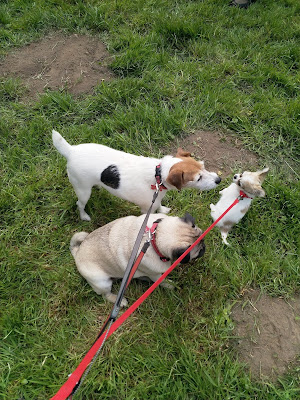 Me and the dogs waited patiently while Robin Hood did his thing.

So it was a brilliant Bank Holiday weekend with dry sunny weather throughout,  a tad chilly at times but just being dry was a huge improvement on years gone by.

Alan and Mavis have now headed home and I'm busy having a good clean up of the Van to the sound of snoring doggies and Ken Bruce on Radio 2.

Email ThisBlogThis!Share to TwitterShare to FacebookShare to Pinterest
Labels: Fun, The Van