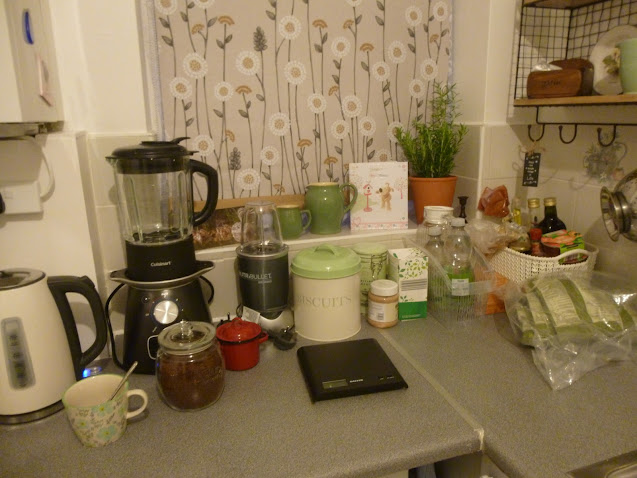 Mess and Mayhem ... it sums it all up nicely.
I'm in that familiar fug of being surrounded by all my possessions and needing to sort out my living.  In my years on this earth I have now moved house sixteen times, the last eight of them in the sixteen years I have known Alan so I know things will get better, indeed with each passing day something gets better.
A kitchen roll holder screwed onto the side of the kitchen cupboard means two items off the worktop and paper towels suddenly being where I can find them without having to search ... yes it's the little things that count.  Although the clock I had put up in the bedroom launched itself back off the wall just as I was getting ready to sleep last night 😄😆 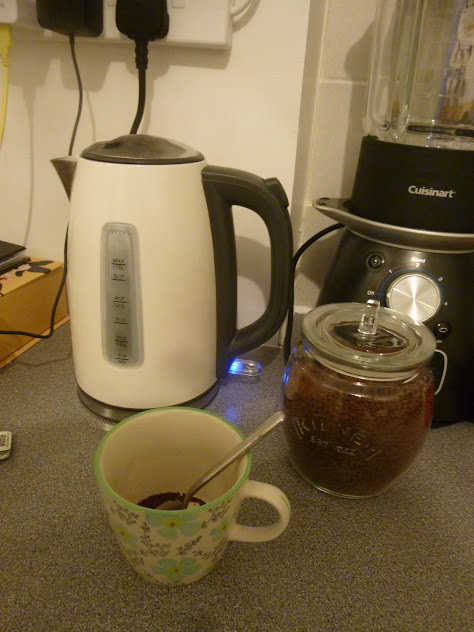 But I've known from arriving where the coffee area was ... 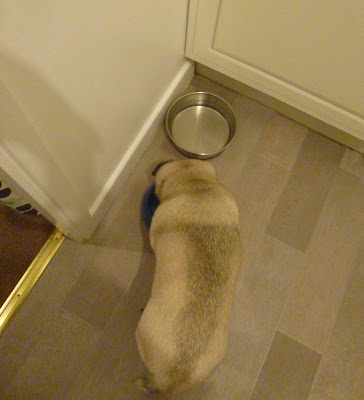 ... and Suky's doggy eating and drinking station was quickly established. 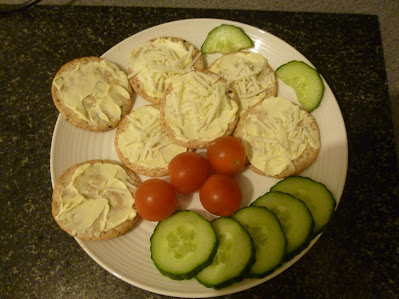 With no oven ... it's SO filthy I wouldn't dream of using it and I'm currently awaiting a call from a professional oven  cleaning service ... and no will to cook on the hob, my tea for my first evening was a plate of cheese and crackers with a nod to salad thrown in for health's sake.  Accompanied by my last can of cider as a house-warming party of miniscule proportions.
I knew I had to be up early yesterday to go back to the Van to retrieve the contents of two forgotten about drawers.  I thought I had checked everywhere so carefully and it wasn't until bedtime and me needing a tee-shirt to sleep in, that the penny dropped ... it and more of my clothes were still in the Van!!
I was there for 8.30am, half an hour before the office staff arrive for work.  I quickly let myself  in and filled a bag with my forgotten clothes and then left as quietly as I had arrived, checking on my way out that I had left no muddy footprints on my beautifully cleaned floors.  We still luckily each have a key to the Van and will keep them until it is sold, so that is how I was able to get back in.  It is still ours and our responsibility until someone else signs on the dotted line.
Being three miles closer to the motorway I decided I would make an early call to Dunelm to see what I could sort out for storage for my clothes at the flat.  I haven't owned a wardrobe in years, the Van obviously had all built in furniture and back home in Wales the wardrobes are also built in.  So I had had the forethought to ask Alan to bring the clothes rail that we used to use at car boot sales with him last weekend.  But that was going to be no use for the knicks and socks etc that I had just rescued from the Van. 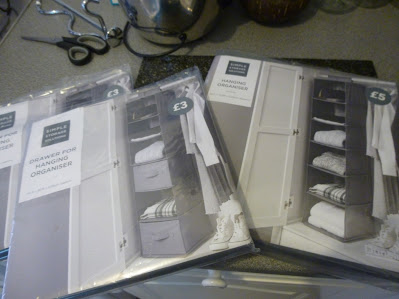 It didn't take me long to find these, absolutely perfect as they can go on any hanging rail.  I also bought myself a few other bits and pieces that were very necessary, and treated Suky to a new dog bed from Pets at Home. 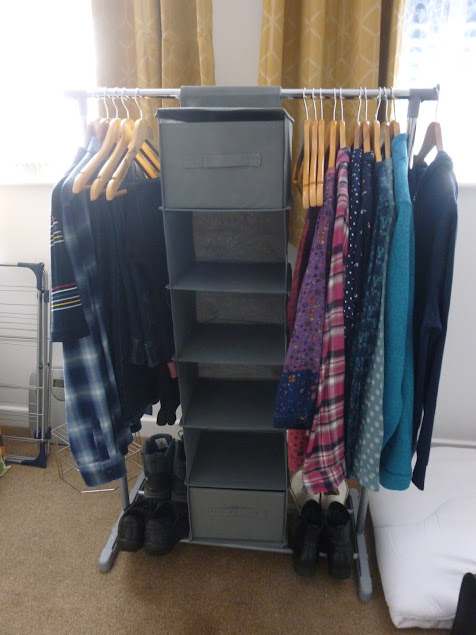 It works a treat, although I might actually pick up a couple more of the drawers next time I'm nearby as they will be so much better for keeping the dust off things. 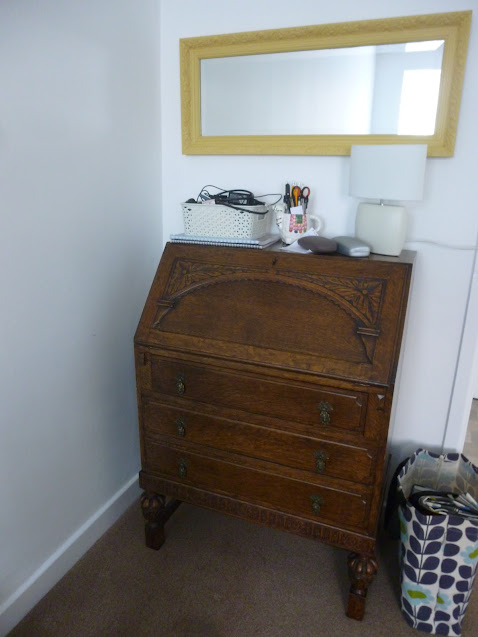 Another couple of new purchases over the weekend were from much closer to home.  I called in the Hospice charity furniture shop again and spotted this bureau that I had seen the week before.  It had been reduced to half price and was now £75 ... it just had to be mine.
The mirror above it was from another little shop on the High Street and for just £20 it also was destined to come home with me.  That perfect mustard colour on a genuine old bevelled edge mirror, just gorgeous. 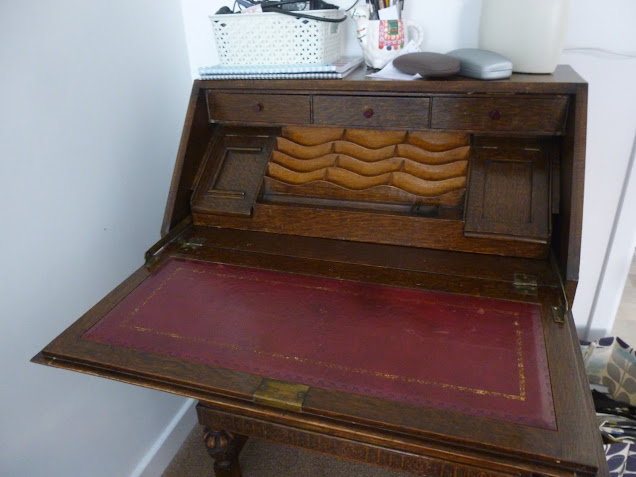 The inside of the old bureau delights me. 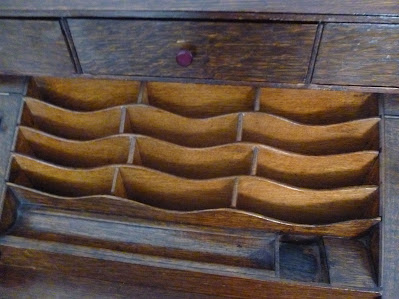 All those letter racks, a pen holder and indent for an ink pot. 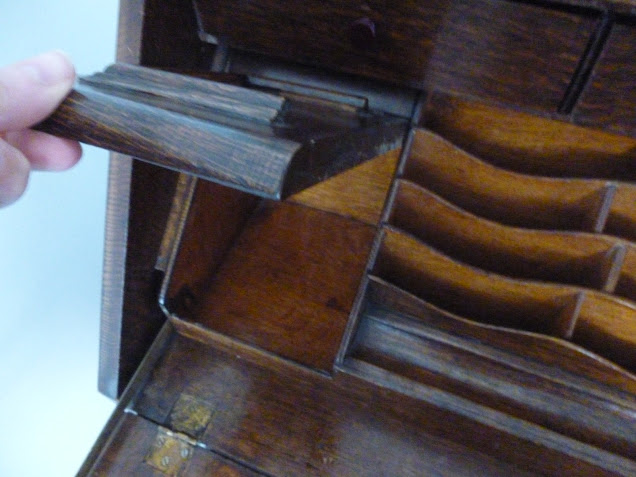 Little nooks and crannies that will hold all my office and stationery wares. 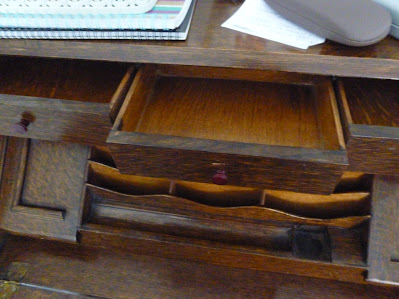 Those delightful little drawers.
Is there anybody else that loves little nooks and crannies of usefulness as much as me or am I sadly on my own in this ... I have a hopeful feeling that I am not alone!!  😉
Yesterday I gave it a thorough clean, and found an old bank statement tucked away down the back of the drawers that let me in on the fact that the bureau's previous owner was also called Susan!!  Todays main job is to line the larger bottom drawers with some of a roll of wallpaper I picked up in a different charity shop as they are slightly more marked inside than the lovely little top ones.  And then I will be filling the whole bureau with as much as it can hold, including all my tools and bit and bobs that are currently on the kitchen worktop and in one of the drawers, which will then free up a kitchen drawer for a bit more re-organisation.  Then hopefully I will start to be able to find at least some of my things without a full scale hunt around the flat.
Oh, I would love to have your opinion.
Do you like the header?  It is a photograph of the start of the riverbank twenty paces from my front door ... or did you prefer the simpler worded heading that just said A Small and Simpler Life.  I just can't make up my mind at all so some input would be very welcome.
Sue xx