First Shopping of the Year =16p 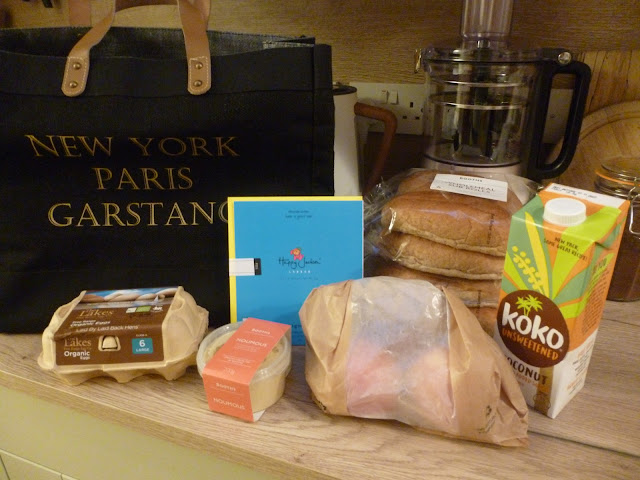 Did I need to go shopping, not really if you are looking at the food I have in BUT  (yes it's a BIG but 😁)  I had the £10 voucher for Booths in my purse along with my January money and it was due to run out this week, and with such a low budget for this year I was not about to let that happen.
And I have just this moment realised that the two vouchers I have were added to the grand total in the workings out for the year, so I do in fact have to take £10 in cash out of my purse for this months housekeeping money.
So the photo is quite clear and you can see exactly what I bought with my ten pounds.  I wanted to get a couple of things that were needed ... the apples and bread rolls, and one very necessary thing to pick up was a birthday card for my brother who is another year older on Saturday and is bringing my Mum to visit Lavender Lodge for the very first time on his birthday, hence me buying some eggs.
Although I don't usually eat eggs I am more than happy to make his birthday cake in the style that he loved when he was a much smaller boy, and yes I will even have a small slice to celebrate the happy day before sending him on his way with all the leftovers. 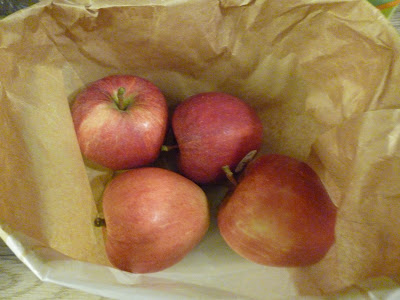 Don't the apples look lovely compared to those poor wrinkly things I used up the other day.  I nearly bought a pack of six for £3, they were gorgeous looking apples and they were already in my trolley before eagle-eyed Alan spotted these being sold loose at just 30p each.  So I quickly swapped over and thought that four of these whoppers would be more than enough for now.
But I had done my trolley contents calculations on the pack of six so I needed to buy something else to get as close to the £10 voucher value as possible as you can't get change from these vouchers.  So I decided on the shelf-stable milk, this is not my usual brand but this was on special offer and comes highly recommended, and the houmous ... that looks so wrong to me I usually spell it hummus but seemingly houmous is the original British way of spelling it although the American hummus is usually used now ... wow who knew, not me for sure!! 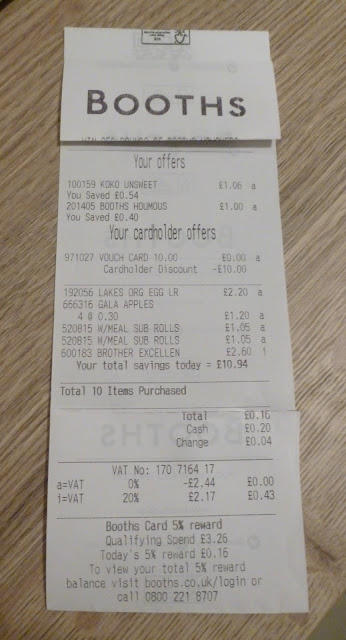 The Booths receipt is a very complicated layout due to how they put the offers at the top and then everything else below.  I figured it out in the end though and have folded it so that you haven't got all the waffle on show and so that it fits to stick it into my Challenge Diary for posterity.
So my first spend of 2022 was a massive 16p ... even the cashier was impressed. 😀
Sue xx
at 5:30 am