I Did Do the Maths ... and Carried on Cooking 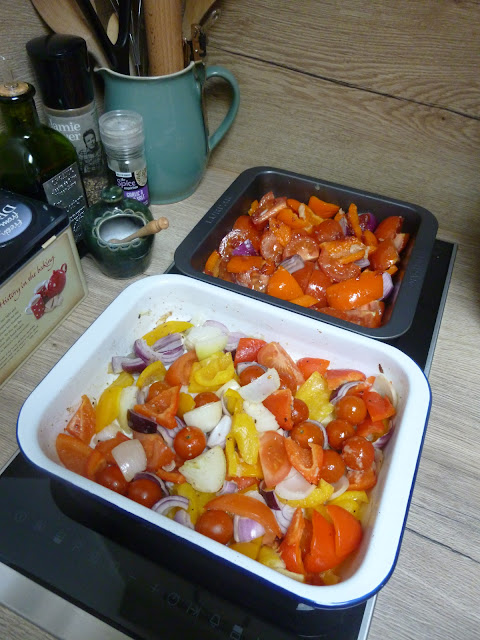 You knew I'd do the maths after yesterdays post didn't you, yes I just had to ... the meal came to approximately £1.20 including using half a bag of the fresh mixed leaves from Aldi as the lovely green garnish.  I rounded upwards each time so I guess it's actually a couple of pennies cheaper.  It would have been even more cost effective to use a portion of ready cooked spaghetti instead of the noodles that I had to hand as I currently have some of the 20p a pack spaghetti in the jar.  This would have brought the cost down to just 85p even being very generous with the spaghetti.
The two trays of food above that went in the oven yesterday, contain most of the fresh veggies from the fridge drawer, I want to see how many meals I can make from them.  The one at the back contains an orange pepper, some red onions and some large very soft salad tomatoes quartered.  The front one is very similar but with red and yellow peppers, red onions and one white onion, cherry tomatoes and one large salad tomato.  The orange pepper should have gone into this tray and the red one in the tray at the back as I was making a red pasta sauce ... but I got confused  😕
They are both seasoned very similarly with onion and garlic flakes, lots of black pepper and some mixed herbs and then tossed in some olive oil.  The smell as they cooked was amazing and drew Alan into the Lodge to see what was cooking. 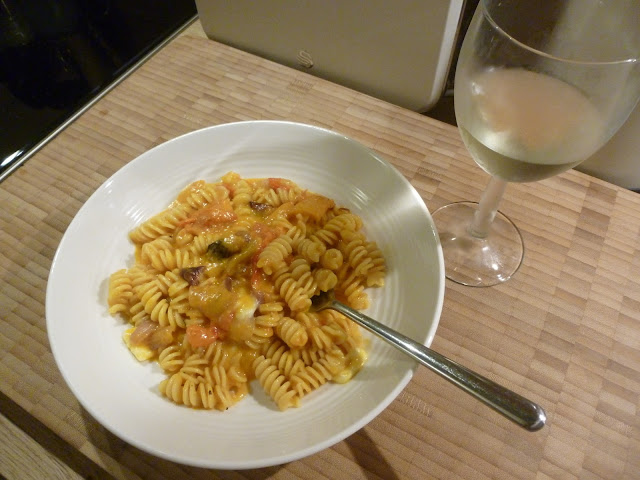 My first meal using some of the sauce and some of the vegetables plus a little bit of dairy free Greek Style cheese was a simple pasta dish ... and a cheeky midweek glass of wine. 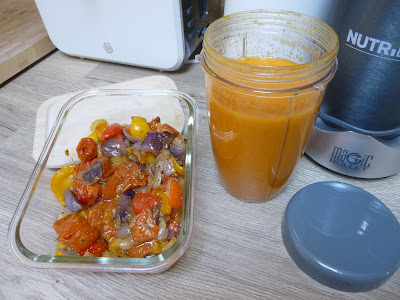 And the leftovers all went into the fridge and I left the whizzed up sauce in the Nutribullet cup to save creating more washing up.
Sue xx
at 10:53 am