My Lovely Lavender Sofa Has To Go 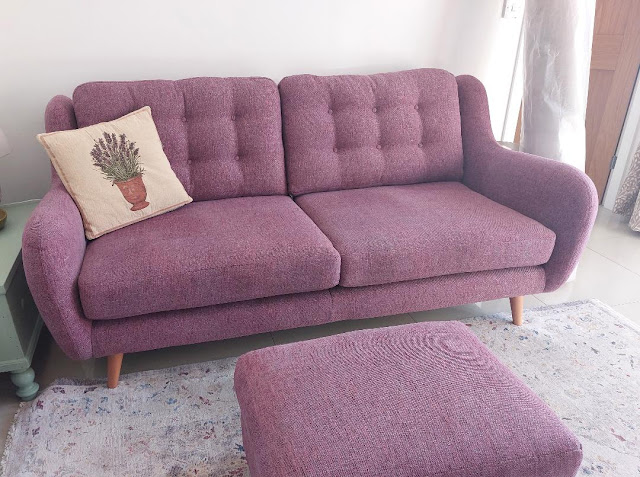 My gorgeous sofa has just been listed on Facebook Marketplace and I'm more than a little bit sad. 😢

Alan and Jason tried valiantly to get it up to the top floor of Alan's house, the idea was to turn the en-suite guest room up there into a proper sitting room for our house-sitters and future potential Airbnb use, but the tight turn into the room at the top of the stairs proved to be the undoing of the plan and they had to bring it all the way down again.

For now the sofa is upended in Alan's kitchen while we put it's legs and cushions back on then and then hopefully someone will want to grab the bargain of the year.  We did offer it to my other son Simon, but I fear the colour was just a little bit too girly for the new home he is setting up for himself.

The new chairs with much better support for my back are being delivered tomorrow morning, I'm really hoping that they will be more comfortable for me.  I also had to go out and buy a new rug as this one just looks dreadful with the new colour scheme ... so it's all change after just seven months.

There's also a lot of sorting out and decluttering going on at the moment as we are doing a Table Top Sale next weekend and we are going to be literally loading Alan's car up to the gunnels with stuff that has been waiting in the spare room sine we moved in, and also things from the Lodge that I have been sorting through after realising that I really just do not need them.

Anything that I have not needed since I moved in is going and it's going to be simplicity all the way.