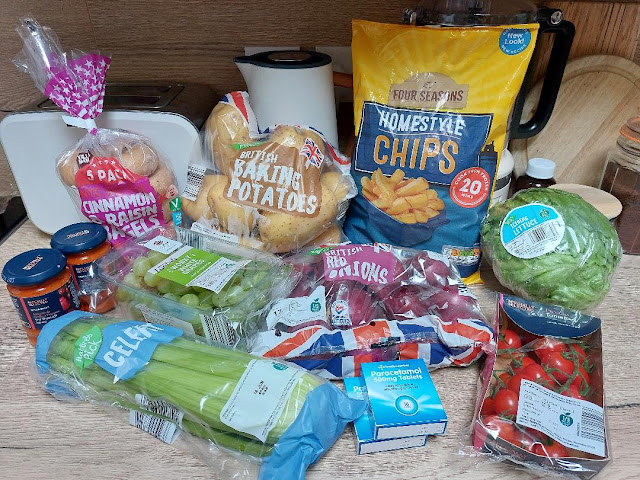 I like it when my shopping bill comes to less than £10, which it does quite regularly actually unless I'm tempted by a bottle or two of wine ... and I'm quite partial to a glass of cold white on a hot sunny afternoon so I've not managed it as much just recently.  😉 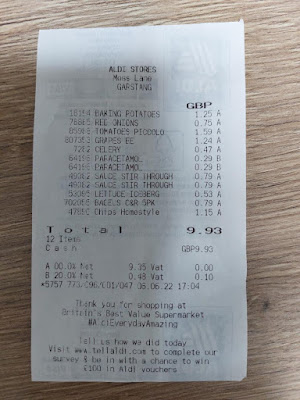 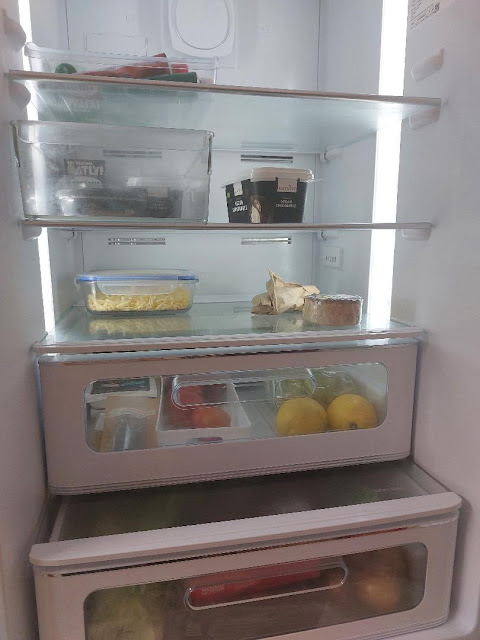 I'm trying to run the fridge down in readiness for the Ration Challenge which starts in ten days, so although I bought some fresh bits to top up what I already had in the drawers there isn't much showing for the expedition to Aldi ... and as you can see almost all the goodies that I bought on Sunday at the Vegan Festival have gone, and bloody lovely they were too.  I have just the 'Porkless Pie' and the Chocolate Marshmallow Rice Krispie Slice left, which now I've typed out the words sounds like a perfect plan for lunch along with some of the Cherry Tomatoes.
I'm purposefully running things down as don't want any temptation to pull me off the straight and narrow during the Challenge, I think I'll even be taking my coffee stocks round to Alan's or I'll be succumbing to temptation and having to pay a fine, which you can do ... but £25 for a cup of coffee is a bit steep!! 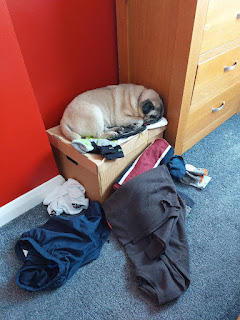 Suky seems to be really missing her Dad this week.
Alan's been away at the works conference that he organises twice a year in Manchester and she started pining for him almost the minute his car pulled away.  I wondered why I was all alone in the Lodge yesterday afternoon and checking up in his bedroom I found Mavis on the bed, Ginger in the dog bed and Suky on the box where Alan had put all his running gear.
I have never seen her do this before, but Dad's sweaty running stuff must have just smelt so perfectly comforting for a little Pug that can hardly hear or see and just needed a hug off her Dad.  I didn't have the heart to wake her so I left her as she was and then tidied things up this morning.  She's now snoring away at my feet while I catch up on computer stuff.  When she wakes up I'll tell her he'll be home in a few hours ... and no doubt almost as sweaty, she can get a cuddle then.
Sue xx
at 12:30 pm