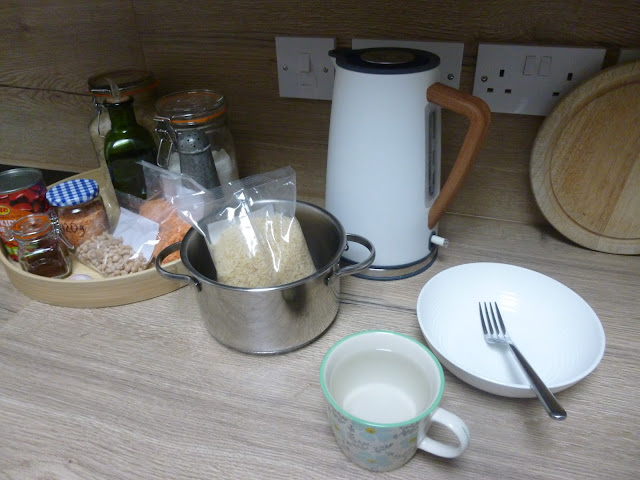 It's here at last Day One of the Ration Challenge 2022.
My first job of the day in the absence of being able to make a coffee, was pour myself a cup of hot water and then set too to weigh out my days rice ration. 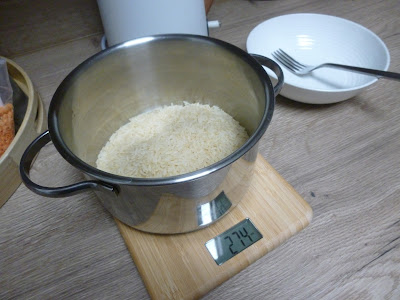 For day one I decided to see just how much one seventh of the rice allocation would make up.  I could have this much every day if I wanted to ... or needed to. 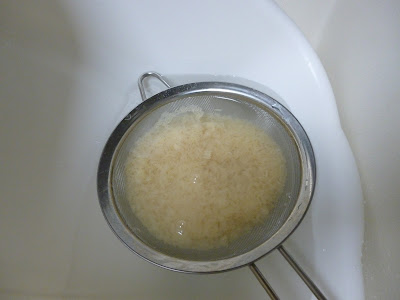 I gave it a good soak and a rinse to remove excess starch, I wasn't in the mood for clumpy rice. 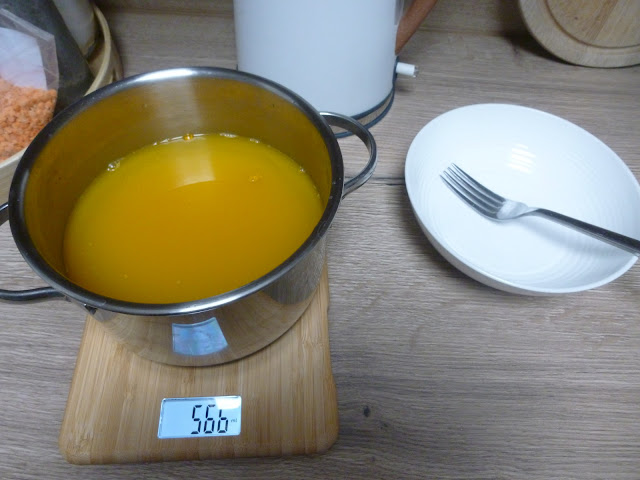 I added twice the weight of water to the rice in the pan, along with a good teaspoon of turmeric, and then brought it to a fast boil before turning the heat right down and setting the timer for 20 minutes.  I then realised what I was about to eat and went and changed out of my white t-shirt!! 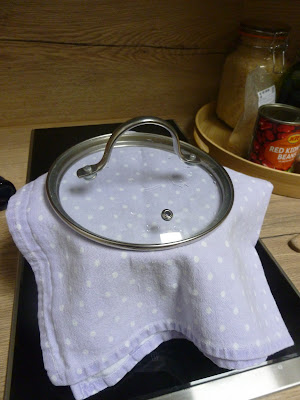 When the timer went off I turned off the heat, put a clean tea towel over the rice with the lid on top and left it to steam for five minutes. 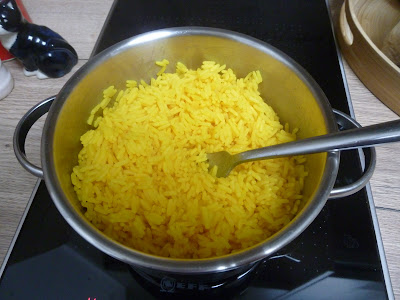 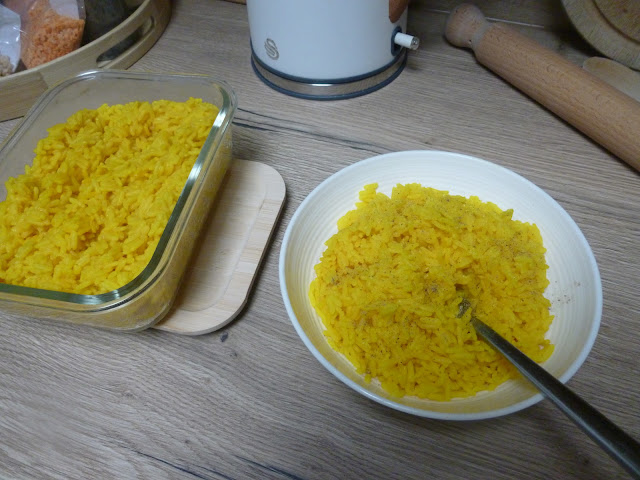 I got myself a good portion for my breakfast, and then put the rest into a cold container to cool quickly, before putting it into the fridge for later. 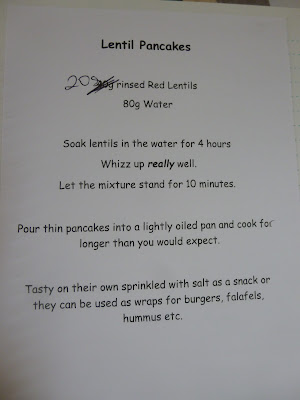 On the menu plan for lunch was Lentil Pancakes, nice and simple to ease me gently into this first day. 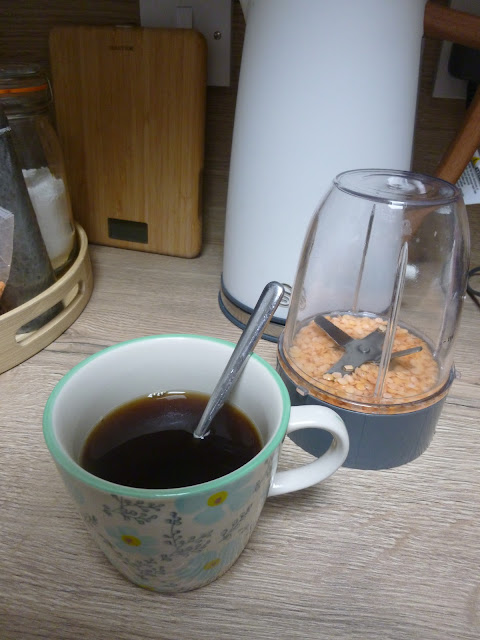 But as I put them to soak I crumbled at the first hurdle, and made myself two thirds of a cup of coffee with a quarter of my two teaspoon coffee ration.
Tip - If you want to soak anything in your Nutribullet cup leave it stood the right way up.  I thought I was being clever soaking them this way, but I had a slow seepage of water onto the worktop.
Oops ... I knew I needed that coffee, it was a shame I didn't have it earlier!! 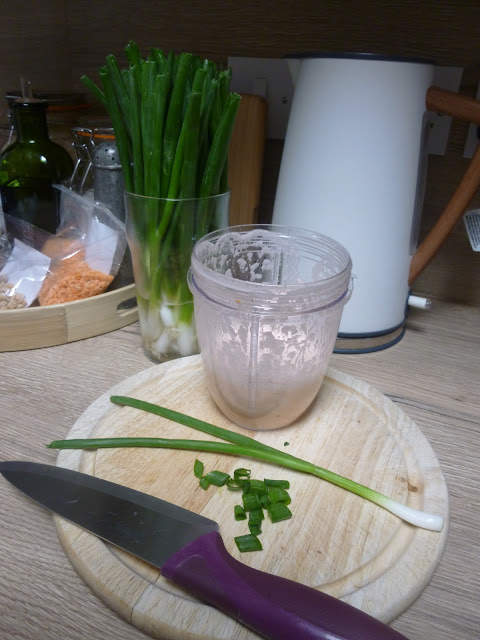 After about four hours I whizzed up the lentils in the soaking water. 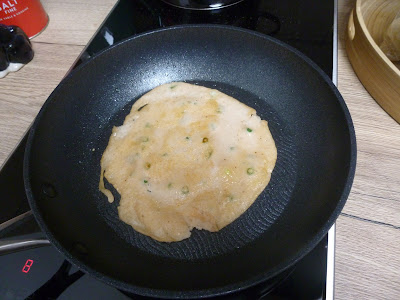 And poured about a third of the mix into the oiled pan, sprinkled some of the spring onion on top and cooked it for about five minutes, before flipping it over and cooking the other side for another two minutes. 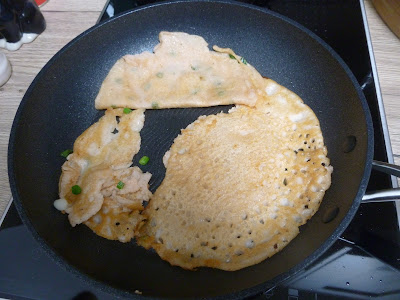 The second pancake turned out to be a lot bigger so I carefully cooked it for a bit longer, these are not nice when they are soggy in the middle, turning it was a problem and some of it broke off.  Once it was cooked through I added the folded in half first one back to the pan to warm up a bit more. 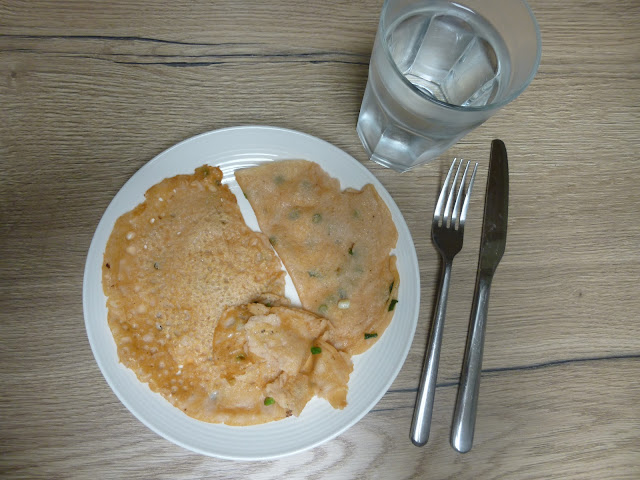 And then settled down to a very messy looking but very tasty, and surprisingly filling lunch. 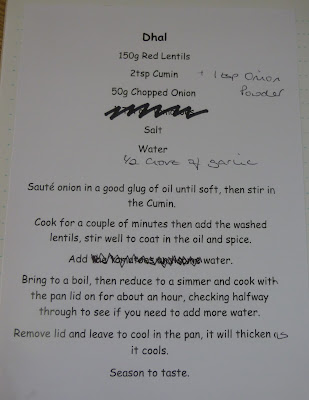 Then it was time to make my weeks supply of dahl. 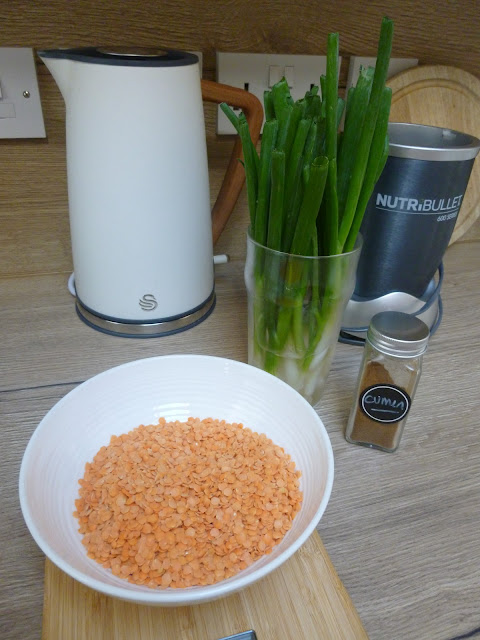 Dahl is simple to make and with simple ingredients at the best of times, but this week it seems even more basic, so it was important to get the flavours right and take care with this.  After all I was using up over half of my red lentils.
Sorry, but I don't know why I took a photo of the lentils on the scales and then didn't even get the weight of them in shot!!  You'll have to take my word for it they weighed in at the 150g that was in the recipe. 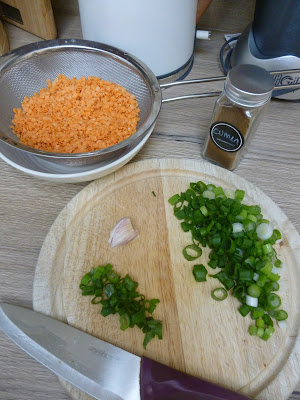 I rinsed them well, and then while they drained a bit I chopped half of my one clove of garlic and about 30g of the spring onions, leaving some of the dark green ends to garnish tonight's meal. 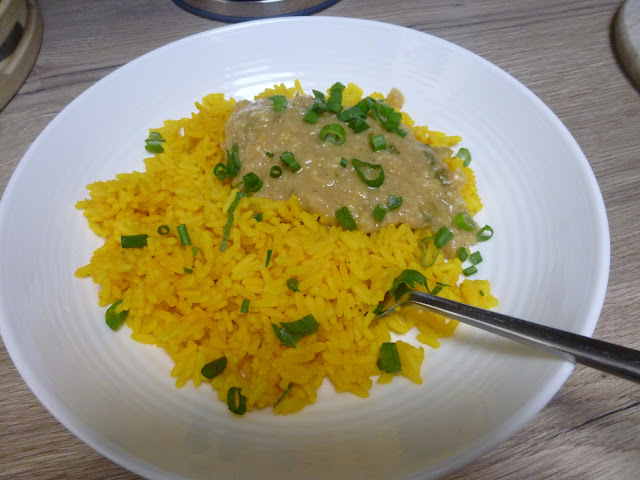 An hour later and I had my tea for tonight. 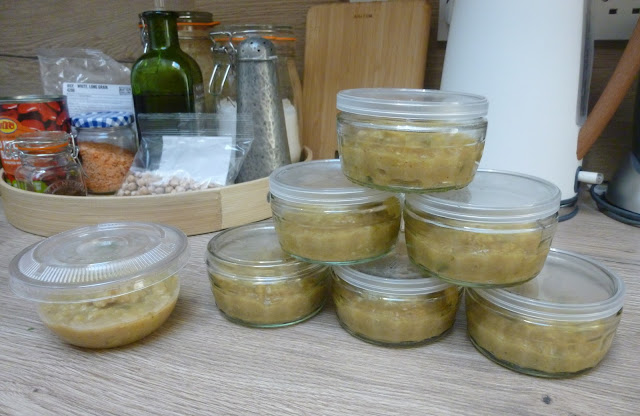 Along with seven little pots of dahl, six of them for my breakfasts each day with one extra for emergencies or to add to the pasty I have planned later in the week. 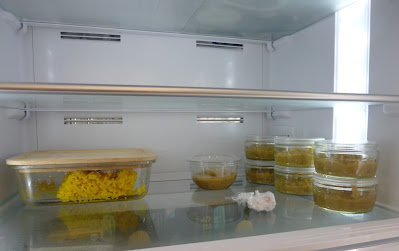 And suddenly that empty shelf in the fridge was looking just a little bit healthier.  That little blob of clingfilm contains the other half of the garlic clove which will be used for my hummus, and as you can see the rice I made first thing was far too much for one day ... so I have my breakfast all ready for tomorrow.  😀

Thank you for following along with my progress and for all the support and donations.  My fundraising page is linked to from the top of the righthand sidebar ... and as you can see we have beaten my target and gone above what we raised between us last year.

A special mention and thank you to Carolyn from The 1940s Experiment who linked to me and the Challenge in THIS post.

See you tomorrow with all the food from Day Two ... and I think there might be a bit more rice involved. 🍚