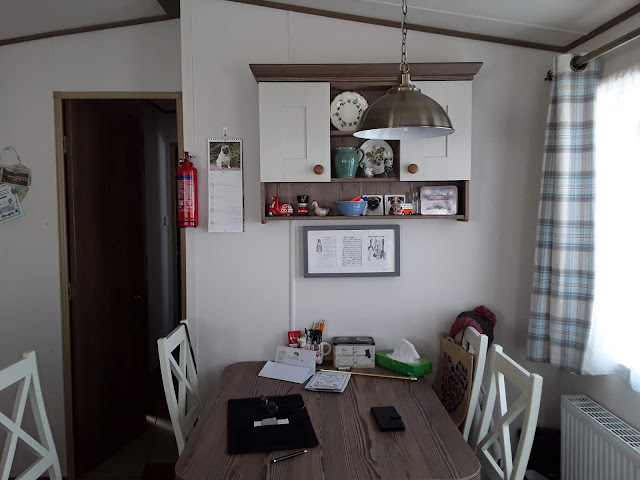 There was nothing for it ... the other day I just had to get started.

I have been umming and ah-ing over this cupboard on the wall above the table since the day we got the van.  I have sat staring at it, stood staring at it and have let it catch my eye as I pass by just once too many times.

So I listed the pros and cons in my head -

Pros -
It balances out the kitchen.
Its fake wood matches everything else in the van.
It holds the keys behind the right hand door nice and neatly and safely.
It holds things we need.

Cons -
It fills up the wall space too much
It is just more fake wood ... that I really don't like!
It's only good purpose is holding the keys ... so much cupboard for keys!!
It looks cluttered with stuff on and terrible if left empty. 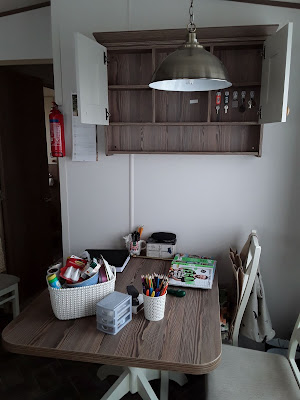 There, finally ... decision made.

It took about two minutes to empty it, about half an hour to find new homes for everything in it, including a new cupboard door for the keys to live behind.  Happily all the hooks they were on were Command hooks, the sort that you stick up and can peel off when you need to ... and they always come with twice as many sticky pads as you need, so I used up all the spares and relocated the keys. 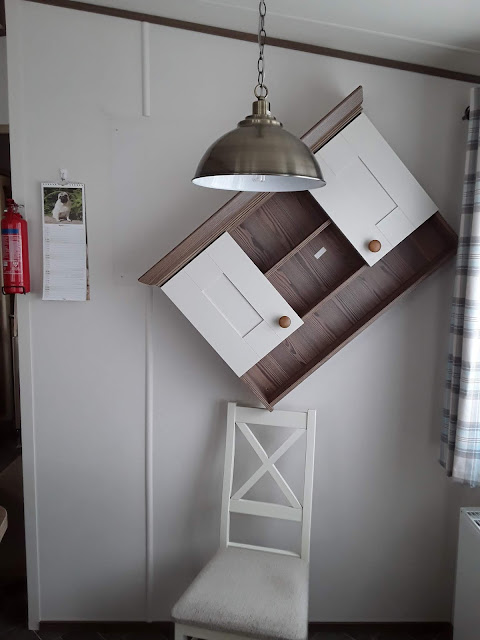 The biggest and most awkward job was getting the bloody thing off the wall on my own ... but after checking that all four screws would actually come out for me ... don't you just hate it when you're left with one that refuses to budge ... I took it off the wall.  Using one of the chairs to support the weight while I unscrewed the last one.

It was a bit of a struggle, and no wonder I've just weighed it ... and it's a stonking 17kg ... all held up on a caravan wall with just four screws!! 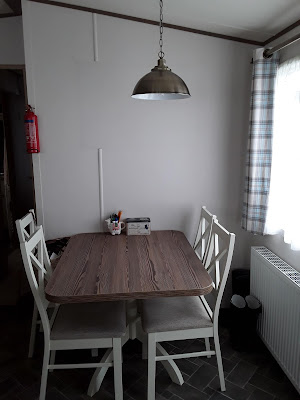 The effect was immediate, there seems to be so much more light at this end of the room ... and a refreshing simplicity.

I won't lie, at the moment as you look over from the living room end the kitcthen does seem a bit unbalanced, with so much going on on the other side and then just a blank wall of emptiness above the table.  But hopefully the final part of my little plan will remedy that nicely.

Anyway I just thought I'd keep you all up to date with my little re-vamp adventures. 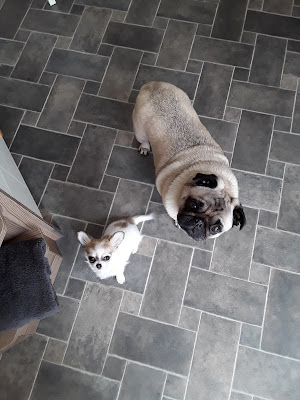 The dogs were fascinated with all the arranging and rearranging, and posed for this shot as if to say "what's next Mum".

Email ThisBlogThis!Share to TwitterShare to FacebookShare to Pinterest
Labels: Simplicity, The Van