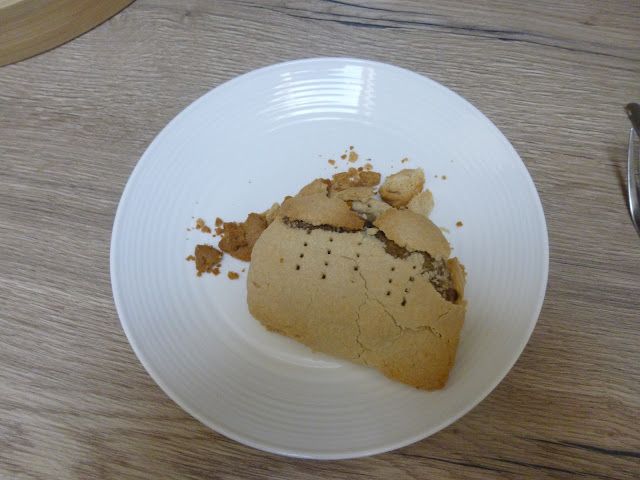 The final day and I just could not face a bowl of rice for breakfast!!

The dogs and Ginger had woken me up at the crack of dawn and the sun was shining, so before I had even had my breakfast we were out walking along the canal by 7.15am and very nice it was too in the early morning sunshine.  When we got back I decided that I would go shopping while the shops were quiet and by 9.30am I had done a tour of Aldi, Sainsbury's and Booths picking up all the things I needed to restock the fridge, the cupboard and some treats that I fancied for my first day off the Ration Challenge.

Then it was home to put away the shopping and warm up the pasty. 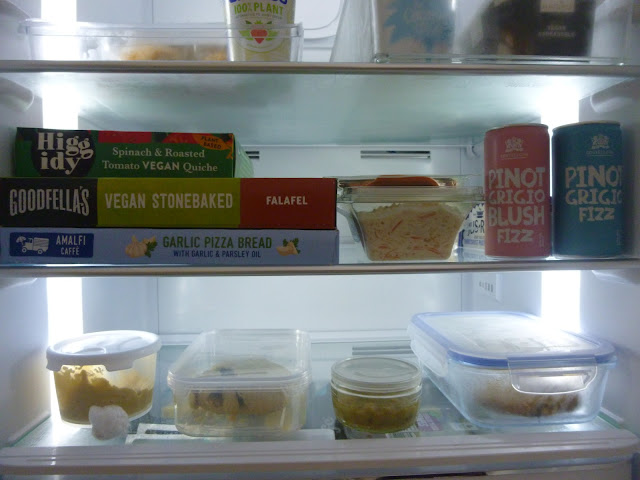 When I put the new food into the fridge the look of the shelves really jumped out at me, definitely a fridge of two halves.  Normal shelf, ration shelf. 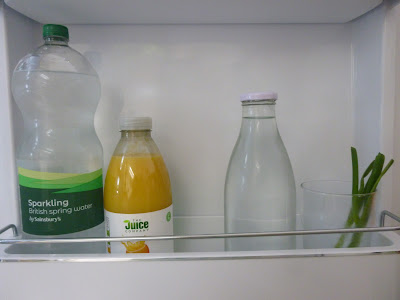 A door shelf of two halves. 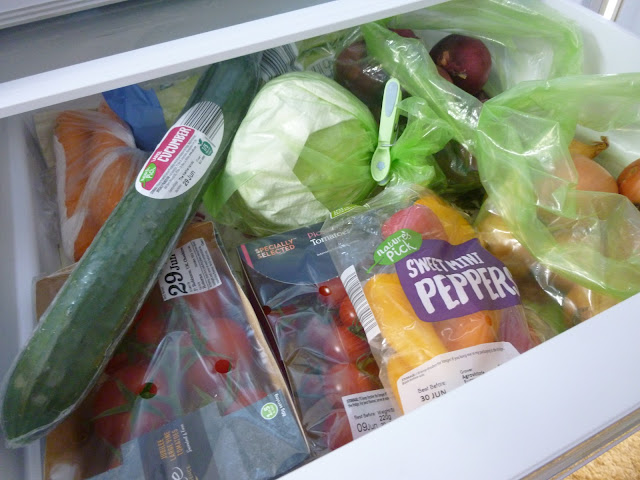 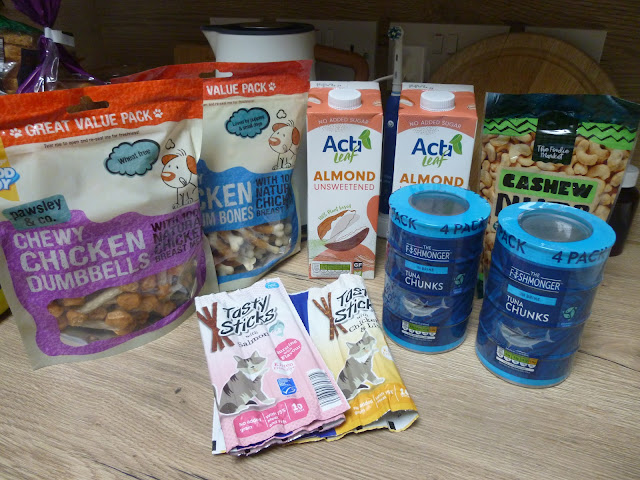 This little array of foods stopped me in my tracks.

Ignoring the almond milk and the nuts ... I had spent more on Ginger's tuna, and his and the dogs treats than it costs to buy a ration pack for a refugee for a month!! 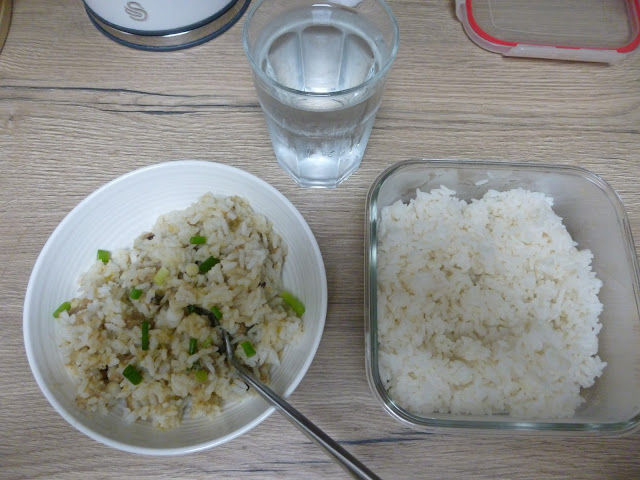 For my lunch I made up my last pan of ration challenge rice and served half of it with the last Lentil and Kidney Bean burger crumbled up, and topped with my last spring onions. 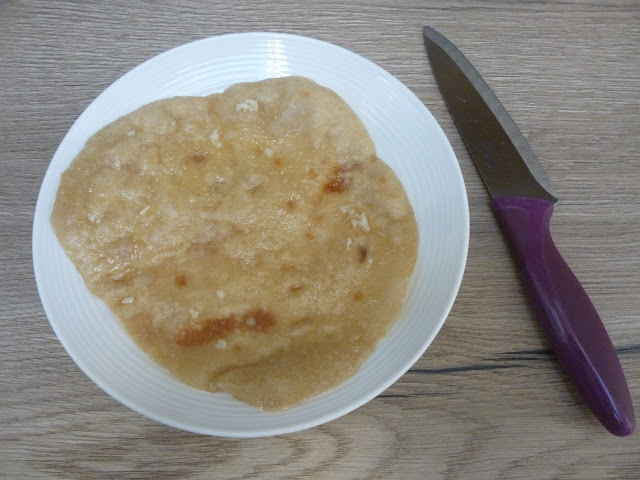 I wasn't really hungry at teatime, that lunch was surprisingly filling ... so I just made myself a garlic bread using the last little bit of garlic, which I had sliced and smooshed up and left soaking in a couple of spoonfuls of oil for the afternoon. It was very garlicky and very tasty.
No vampires will get me tonight!! 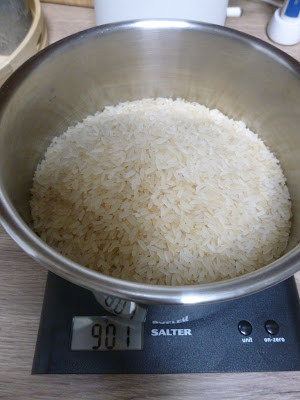 Next I wanted to measure out what I had left, there was a surprisingly large amount of rice left considering I feel like I have been eating it until it was coming out of my ears! 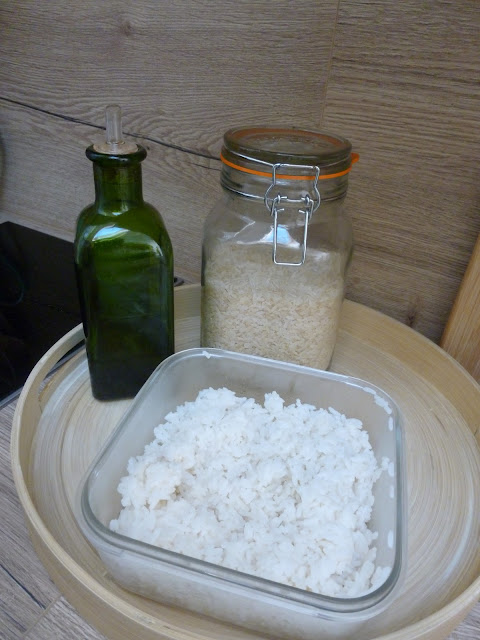 So all that is left from all the food that I started the week with, is the raw rice, the cooked portion of rice and about 80mls of oil. 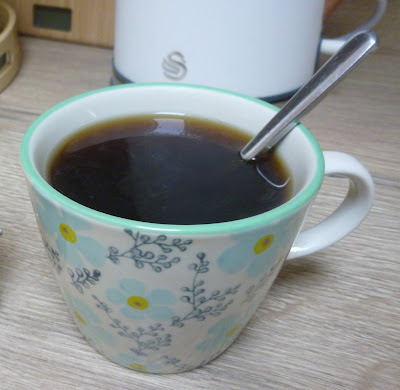 And then after a look at my final total, I decided to pay a fine to round it up to the next hundred and treat myself to a cheeky cup of coffee while I watched television.
One cheat during the whole of Ration Challenge Week ... not a bad result!!
Thank you to everyone that has supported me both with donations and moral support, it has all been invaluable and I am so grateful.
And for the final time ... my FUNDRAISING PAGE IS HERE just in case you want to nip on over and see what the final total is.
Thank you, I'll be back tomorrow with a final summary of my thoughts from the week.
Sue xx
at 6:00 am