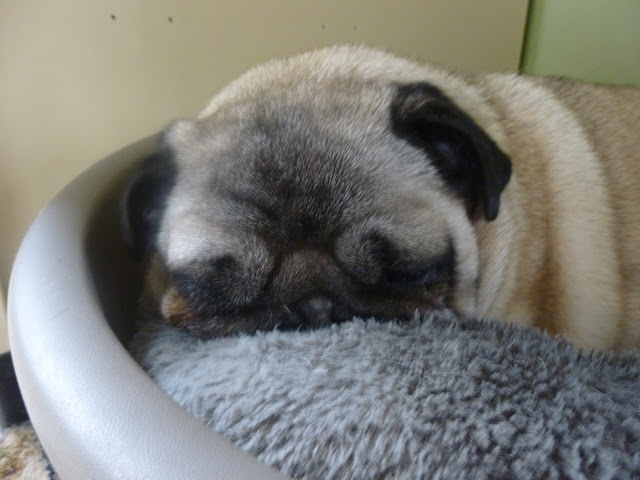 Thank you so much for all the comments yesterday.

Yes, we were so relieved that we managed to get Suky to the vets, if we hadn't she could have lost the eye.  Hopefully it will respond to treatment, and we'll see how things are improving, or not .... but I am optimistic ... tomorrow.

She is getting resigned to us pouncing on her six times a day to administer her antibiotic eye cream and the moisturising eye drops.  She must be starting to realise that things feel better afterwards. 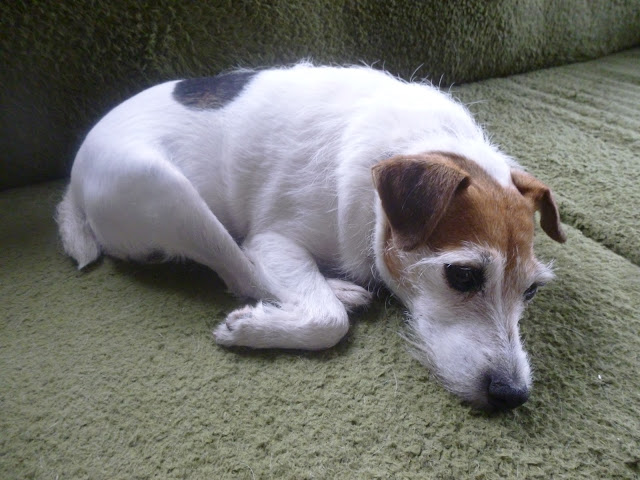 Both dogs have been down recently.  Playing out and running from one end of the paddock to the other is not the same as a good walk along the prom in Llandudno meeting and greeting other dogs and people.

Just look at Mavis ... this mornings photo sums everything up so well  😢

Last night we recorded a show especially for the dogs on ITV ... How to Keep Your Dog Happy at Home ... and they loved it and were glued to the screen for the full 30 minutes, including the adverts in the middle which were predominently animal based or featured animals in them.  We've decided to keep it on the Freesat box and let them watch it at least every other day, we're also recording tonights Paul O'Grady's for the Love of Dogs, another of Mavis' favourite shows.

Before I go I was asked about Suky's name yesterday :

Google answer: Suky as a name for girls and has its root in Hebrew, the meaning of the name Suky is "lily". Suky is an alternate spelling of Sukey (Hebrew): pet form of Susan. This was totally coincidental, in a weird as weird can be sort of way, as I named her Suky in honour of Alan's Mum Jessie, who referred to loving, cuddly lap dogs as 'sooky sooky dogs'.  Suky was born the day after Jessie died.

Email ThisBlogThis!Share to TwitterShare to FacebookShare to Pinterest
Labels: Animals, Tales from Wales